A Walk to Remember

Our days in Haiti are quickly coming to an end and I have been thinking about leaving ever since this weekend. I am ready in some ways to go home, but if I had the opportunity, I think that I would choose to stay here or adopt a few kids to take home with me! Each day gets harder and harder, knowing that I will have to say goodbye to this beautiful country and all of it’s people. I know though that I have made connections with people that I hope to maintain for the rest of my life. Each day I think about having to say goodbye to the kids too and I can’t express to you how much my heart breaks each time that I think about this. In just the few short weeks that I have been here, I have made connections with some of the kids. I am very grateful to have made these relationships, but I can’t help but to think about all of the kids that I haven’t yet reached. Every day I connect with someone new, while keeping the connections that I have previously made. This is hard though and I still have so many that I want to reach out to, but I don’t have the time. I know that leaving on Friday morning will kill me. 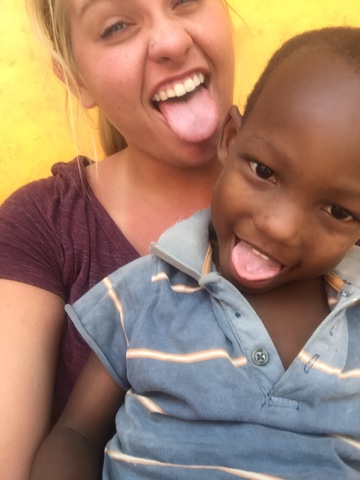 Solange, the girl that I have made quite the relationship with already always enjoys showing me all of her knowledge and tries to teach me new things as well. Today, it was washing clothes with large stones of soap, buckets, and little water. I didn’t want to step on any toes of those who work at the Orphanage so I chose to watch her and learn the motions (she wouldn’t let me go on without showing her that I understood). Solange is probably 7 years old and she is already so smart and knows more about life than I probably did at that age. My goal before I leave is to play with her, really and truly get her to laugh and enjoy because she is always so busy with chores or learning. I want her to know that there is fun in life too and that she can have it if she chooses. 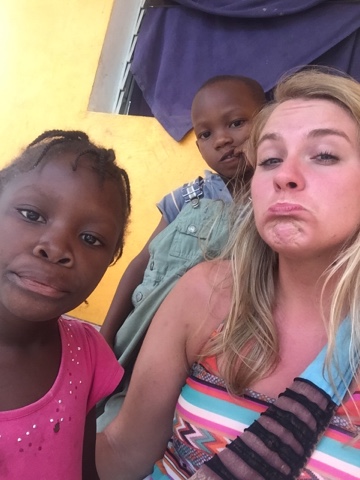 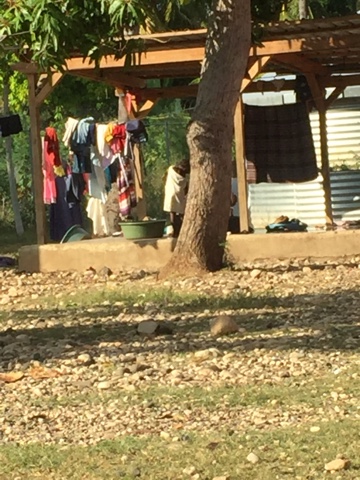 Abby and I had quite the tap tap experience today on our way to the orphanage. It was pretty full, Haitian Style as we like to describe it, with the back end almost touching the ground and the engine struggling to keep going. This is a normal occurrence for tap taps, but today, Abby started off on my lap, some people got off, she got her own seat, and then some more got on. There ended up being a young man probably about 13 or 14 if I’m any good at guessing that was standing very awkwardly so I told him that he could sit on my lap. This is also something common in Tap Taps and I thought nothing of it, but the Haitians thought it was the most interesting thing ever. A white, blonde girl allowing a boy to sit on her lap. Apparently it was hilarious and some people joked that “Blonde is just a color”, haha. The boy got pretty embarrassed but he kept on sitting. This was yet another point on this trip that I regret not learning any French. I’m sure everyone on that truck was full of good humor and that poor boy wouldn’t have had to have been so embarrassed if I could speak to everyone. It was a good laugh anyhow and another thing that I will miss about this country.

While the children were eating tonight at the orphanage, a man around mine and Abby’s age came up to us to introduce himself and ask us what we were there for and such. We exchanged small talk with him using some broken English and he ended up teaching us a few Creole phrases. WHERE HAS THIS MAN BEEN THE PAST TWO WEEKS?! Boy, if I would have met him sooner, you bet I would have brought a notebook and pen to the orphanage everyday to learn as much as I could. He was very friendly and really seemed to enjoy teaching us. He also told us that he tudors the children after school sometimes and helps them with homework before he takes some classes himself at night. As slow as everything happens in this country, the people here are very self motivated! Definitely a breath of fresh air compared to the American Culture.

After a short Creole lesson, Abby and I left the orphanage for the first time with no money for transportation. We were going to ask to trade our American dollars with someone, but he wasn’t there today so we got to make the 4 mile trek back to our hotel. The walk itself wasn’t so bad, but the dodging motos and trucks while they speed by you about a foot away and the kissing faces that you get from the local guys weren’t too exciting. Not saying that I haven’t learned more than I could imagine from this trip, but if I learned anything, it is that staring is the most irritating thing ever and the extra attention from the guys is more annoying than flattering. Abby and I often found ourselves frustrated and walking fast when we came across a large group of guys. There were even a few points that we started blowing kisses back in our own sarcastic attempt at showing them how unwelcome and weird it is. We laugh about it now, but it isn’t that funny as it’s happening to you. Our best outlook is that it’s best that we are getting kissing faces and such instead of something else so we laugh about it and just shake our heads.

We have finished our placement for class and tomorrow will consist of going to the beach in the morning and then the orphanage in the afternoon when they are finished with school! Oh!! And an update about the crazy road blocks we saw over the weekend: they are a way of making money for the Carnival festival that happens in February.

Keep us in your thoughts over these next few days…leaving will be one of the hardest things that we will have to do. Not only will we have to say goodbye but also hello again to the culture back home. I already know that this will be an even bigger culture shock to go back home than it was to come here. 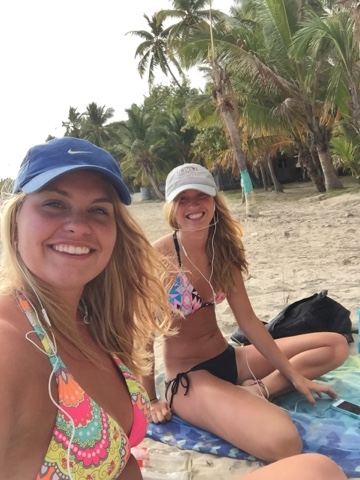